To See That Red Thing Flow

a monodrama for baritone, double bass, and piano 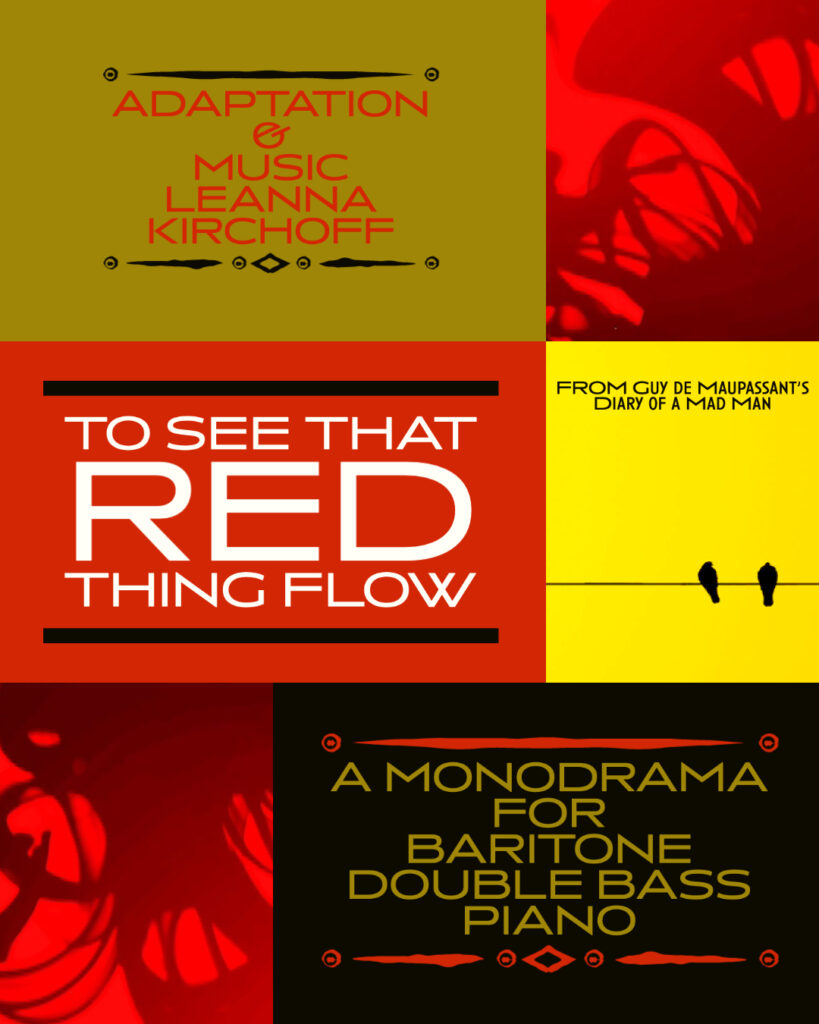 To See That Red Thing Flow is a mono-opera for baritone, double bass, and piano based on the 1885 short story, Diary of a Madman, by Guy de Maupassant. The creation of this new work was funded by the Austin Peay State University Center of Excellence for the Creative Arts.

In the 25-minute opera, we hear passages from personal diary entries of a prominent and well-admired judge. He lives out his insatiable desire to kill through his work as a judge, and also recounts two murders he committed, for which he was never caught. Maupassant’s text offers a lens through which we can consider violence in our contemporary world. The judge’s contorted point of view confronts our sense of morality. He sings, “For to kill is the great law set by nature in the heart of existence. There is nothing more beautiful and honorable than killing.”

The music of the opera embodies the judge’s duality as honorable magistrate and vicious killer. There is a marked difference in the music between when the judge justifies his behavior and when he recounts his killing episodes. The music becomes most angular and cacophonous as he progresses toward murdering, as if the normally composed judge feels a chaotic rush of desire and savagery. The most lyrical and consonant music emerges in moments when his desire for blood is satiated. There is also a frequent chasm between music heard in the high range of the piano and the low range of the bass, serving to both emphasize the two sides of the judge’s character, and for a more pragmatic reason, to avoid covering the baritone vocal range. The melodic lines and harmonic motion often fall downward like catabasis figures that foreshadow doom and portray the judge’s descent into lawlessness.

Maupassant’s judge seems an ideal character for an opera with his aberrant behavior and horrifically dramatic actions. It is unfortunate that this character is not larger than modern-day life. Although written over a hundred and thirty years ago, Maupassant’s 19th century description is extremely similar to profiles of today’s serial killers, two aspects in particular being the judge’s unassuming position in society and killing an animal as a first experiment. Maupassant’s judge and this story is not unfamiliar to us. His original Diary of a Madman ends with the caution that, “…there are in the world many unknown madmen; as adroit and as terrible as this monstrous lunatic.” As news of deadly shootings or bombings committed by a lone perpetrator appears in our world news at an alarming frequency, To See That Red Thing Flow is chillingly contemporary.

An honorable French judge retires to his private chambers after having sentenced a criminal to death. He reflects on why people derive pleasure from destroying life.  Interestingly, he remarks that killing should be a pleasure, and killing is the next best thing to creating.  In fact, he recounts choking his servant’s goldfinch to death as a first little killing experiment.  Just before killing the bird, the judge makes the point that even children kill insects and little animals that come in their way. Upon killing the goldfinch, the judge is enthralled with the blood trickling from the dead bird.  He tells of cleaning up the scene just as an assassin would, and later buries the goldfinch in the garden beneath a strawberry plant.

In the following scene, the judge confesses to yet another murder.  He was walking by a river when he happened upon a sleeping fisherman.  His admission is interrupted by episodes in which he asserts no one would ever suspect him of murder because of his esteemed position.  The judge is frustrated that society has deemed murder a crime since killing is one of the great facets of existence.  He finds a spade in a nearby field and uses it to club the sleeping fisherman.  He exclaims that there is nothing more beautiful and honorable than killing, and becomes intoxicated by the rose-colored blood gently flowing into the water.

In his final monologue, the judge proudly states that he presided over the court case in which the nephew of the fisherman was found guilty of the murder.  The judge sentenced the nephew to death and attended the execution.  He relishes in this satisfying “justice” and takes great pleasure having crafted a second murder from his own crime.  As things fades away, the judge muses on how little it would take to be caught.