five songs for baritone and piano

I.  He thinks of his Past Greatness when a Part of the Constellations of Heaven
II.  Meditation of the Old Fisherman
III.  Running to Paradise
IV.  Never give all the Heart
V.  The old Men admiring Themselves in the Water 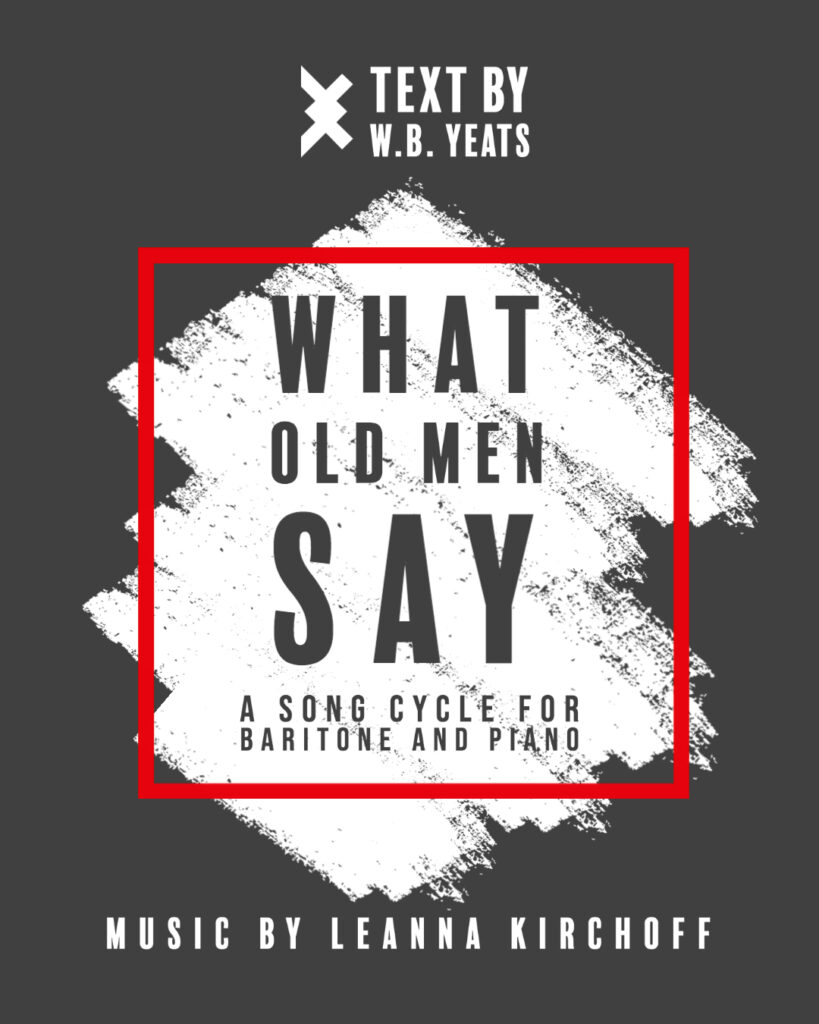 1. He thinks of his Past Greatness when a part of the Constellations of Heaven
(from The Wind Among the Reeds, 1899)

I have drunk ale from the Country of the Young
And weep because I know all things now:
I have been a hazel-tree, and they hung
The Pilot Star and the Crooked Plough
Among my leaves in times out of mind:
I became a rush that horses tread:
I became a man, a hater of the wind,
Knowing one, out of all things, alone, that his head
May not lie on the breast nor his lips on the hair
Of the woman that he loves, until he dies.
O beast of the wilderness, bird of the air,
Must I endure your amorous cries?

2. The Meditation of the Old Fisherman
(from Crossways, 1889)

You waves, though you dance by my feet like children at play,
Though you glow and you glance, though you purr and you dart;
In the Junes that were warmer than these are, the waves
were more gay,
When I was a boy with never a crack in my heart.

The herring are not in the tides as they were of old;
My sorrow! For many a creak gave the creel in the cart
That carried the take to Sligo town to be sold,
When I was a boy with never a crack in my heart.

And ah, you proud maiden, you are not so fair when his oar
Is heard on the water, as they were, the proud and apart,
Who paced in the eve by the nets on the pebbly shore,
When I was a boy with never a crack in my heart.

3. Running to Paradise
(from Responsibilities, 1914)

As I came over Windy Gap
They threw a halfpenny into my cap,
For I am running to Paradise;
And all that I need do is to wish
And somebody puts his hand in the dish
To throw me a bit of salted fish:
And there the king is but as the beggar.

My brother Mourteen is worn out
With skelping his big brawling lout,
And I am running to Paradise;
A poor life, do what he can,
And though he keep a dog and a gun,
A serving-maid and a serving-man:
And there the king is but as the beggar.

Poor men have grown to be rich men,
And rich men grown to be poor again,
And I am running to Paradise;
And many a darling wit’s grown dull
That tossed a bare heel when at school,
Now it has filled an old sock full:
And there the king is but as the beggar.

The wind is old and still at play
While I must hurry upon my way,
For I am running to Paradise;
Yet never have I lit on a friend
To take my fancy like the wind
That nobody can buy or bind:
And there the king is but as the beggar.

Never give all the heart, for love
Will hardly seem worth thinking of
To passionate women if it seem
Certain, and they never dream
That it fades out from kiss to kiss;
For everything that’s lovely is
But a brief, dreamy, kind delight.
O never give the heart outright,
For they, for all smooth lips can say,
Have given their hearts up to the play.
And who could play it well enough
If deaf and dumb and blind with love?
He that made this knows all the cost,
For he gave all his heart and lost.

5. The old Men admiring Themselves in the Water
(from In the Seven Woods, 1904)